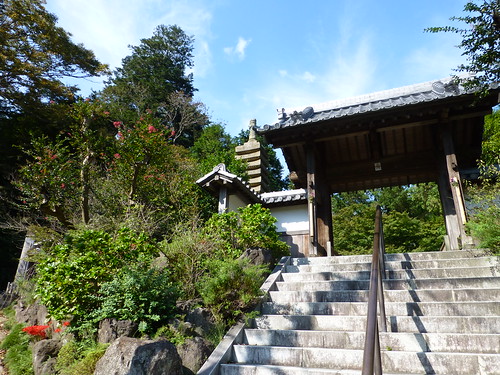 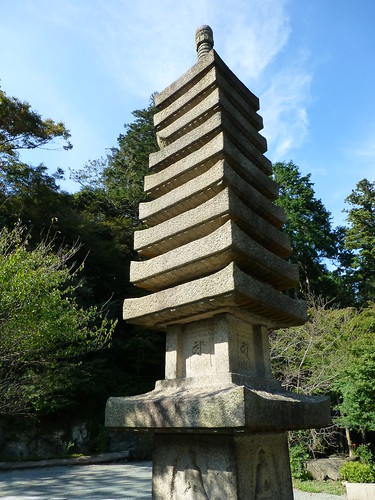 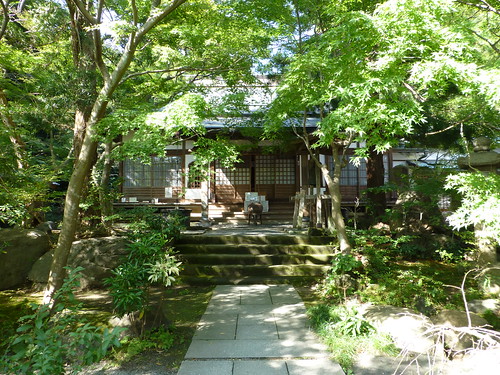 Kakuon-ji is located at 10 minutes walk from Kamakura-gu, where is between ridges. At the other side of the ridge, there is Kencho-ji. Kakuon-ji is in nature.

There is a hall which looks like main hall in front of the entrance, but it is Aizen-do which enshrines Aizen-myoo and was moved from Dairaku-ji. You're not able to enter the precincts freely, you have to participate in a tour guided by staff, which held every hour. It takes 500 yen for admission fee, but the tour is very good, because the staff talks very detailed explanation during the about 50 minutes tour (guidance is Japanese only). Photography is prohibited.

The tour is going to the hondo (main hall) through the path surrounded by trees. There is a 800 year old Kaya tree on the side of the hondo. It doesn't have anything decorated with Simenawa (enclosing rope) or something, but the great tree has seen 800 years of history of the temple. There is a Yakushi Nyorai-zo and Juuni Shinsho-zo in the hondo. I also saw Juuni Shinsho-zo at the Kamakura Museum of National Treasure. At the time I visited, the god of dog has been moved to the Kamakura Museum of National Treasure.

Going to the back of the hondo, there is a big Metasequoia (Akebono Sugi). It is only 50 years old, but very high. The stuff worry that the hondo is broken if the tree is fallen. The problem is that it was given from Emperor Hirohito, so it should not be cut. This Metasequioia tree shines golden with morning sun, and it is really beautiful only few days a year.

In this area, Plum blossum in February, hydrangea boom in June. In addition, in April, Kotsubogoke is growing all around is so beautiful.